**Hey Smarty Pants, You are in Middle of the Piu series. To know it well, read following chapters too:

Piu was wretched and what led her to this misery was arrival of nosy neighbor Sharma Uncle. Sharma was the most annoying individual and self-acclaimed gentleman. He held expertise in lowballing others and finding faults in their lives.

Every time little Piu felt a strong urge of bringing Uncle Sharma down and teach him some manners. But Daddy was always successful in mincing her anger. But, today the volcano seemed to be sweltering and burst out.

Sharma uncle entered the house, parked his huge butt on the finest chair in the garden and started flipping through the newspaper. Piu was still busy in making mud-pies.

“Or in the kitchen washing dishes khi-khi-khi” Uncle tried to poke Piu’s brain.

“How long you have been repeating the same dialogue Uncle, Grow Up” said Piu, busy scratching her head to cultivate new and pierce thoughts so that she could give an edgy fight to arrogant Uncle.

“Why are you scratching head, either wash it or turn bald like me” Said uncle, caressing his bald head and scratching his beard with another.

“Mr. Bald-headed Gentleman, why don’t you shave and clean your cheeks like mine? People need hair on their heads not on their cheeks.” Volcano Bursted!

“Sharma Uncle, I hate that unclean stubble and also your idea of making others feel minor. Now tell me who needs to grow up?”

Uncle was too shocked to stand or sit in front of that little revolution.

“Who was it honey” asked Mommy responding to the voices outside.

This post is part of the "Protest Against Smelly Stubble Activity" (P.A.S.S) in association with BlogAdda. 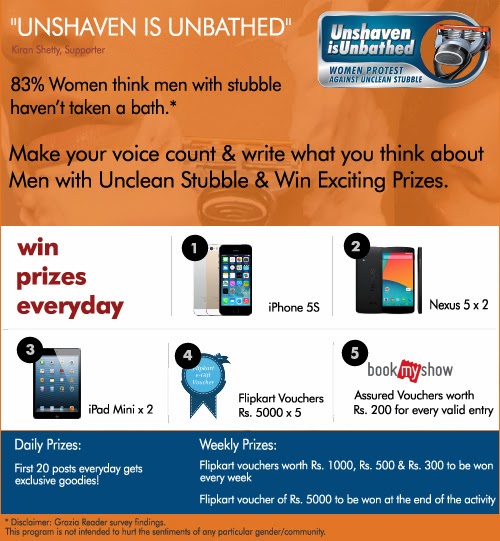 I accept your invitation Poonam Khanduja Thanks for the Tag.


I request all the tagged bloggers to take out some time and write for this amazing BlogAdda contest!
Posted by Unknown at 11:45 AM