From Tablet to Tablet: HAPPILY EVER AFTER Journey: #BETTERWAY with Lenovo Yoga Tablet

Ok! I confess, I am gonna write a long post here! Reason, switching from ‘tablet to tablet’ is a looooong story.

It all began with my grandma’s fairytales, which often ended with an emblem sentence “And they lived happily ever after”.

Wow! Amazing it sounded that time. This sentence and its delivery by my Grandma at the end of each story was so powerful that I created a strong belief of having a magical world, where one day, everything will fall in place automatically and I will live HAPPILY EVER AFTER!

But, did this really happen? Obviously no! There’s a thin line between the world we live in and the world we think we deserve to live in. And, this gap is never neither filled, nor eliminated. Thus, we live an incomplete life, waiting for a day, where magic will happen, blue birds will sing outside our bedroom window and wind will sing to us; In short, HAPPILY EVER AFTER thing keeps nagging in our butt.
Long story short, (I have mentioned this sentence in large font, so that impatient people could also spare some time and gather some courage to read on further).

Heya SmartyPants…Click on the Above Image to read all funny dialogues easily. It will Open in New Tab!

I often thought to myself, what I am doing in here! I need to get up and chase my dreams; But 9 hours of office sucked my soul and staring at the computer screen for whole day and tapping my fingers on the keyboard turned me insane. I hated thinking of computers back home. I dropped my idea of buying a laptop and TABLETS became my only matter of interest!

Relying on these TABLETS, turning my mind insomniac, I somehow managed to look compos mentis at work place. But how long can someone hide a volcano inside. 9 hours of sitting at the computer table, staring at the screen and writing about such content, which didn’t match my interest level injured HOLD, STAND AND TILT mode of my mind.

I witnessed my imagination power drifting away from me. The last thing I could imagine at that time was the Fairy of my imagination (who made me believe on grandma’s Happily ever after tales) was waving me Goodbye. It was high time but I couldn’t help it. They increased my salary and I had turned Buck-Pup (I named this myself for running behind money and ignoring health).

But, one day, I saw this…And it changed my whole world. I somehow managed to gather courage hiding in each of my veins and waved Goodbye to my job!

I somehow managed to gather courage hiding in each of my veins and waved Goodbye to my job!

Now, I was all set to pursue what I wanted to do-Photography as hobby and fitness training and RJing as profession. But, it wasn’t that easy; I had gained enough of weight and proved the above mentioned EVOLUTION PICTURE right. So I first had to draft and plan and start working accordingly.

So, I decided to: Blog regularly, Watch some funny videos, learn Yoga online and of course watch some photography and editing videos on Youtube. Guess what, doing all this again needed sitting on a computer or Laptop! No… I wasn’t over with the trauma I suffered during my job. SO buying a laptop was absolutely No-No!

So my brother suggested get a Tablet and I shouted I have had enough in last one year. Tablet for almost everything except contraceptives!

He was sure his sister had turned psycho so he decided to explain what exactly a tablet is and I found myself stupid to think that I had almost forgotten that a gadget named TABLET also exists.

I bought one such tablet, which was praised very well by its makers of course, through the advertisements and I was happy. I thought finally I had a little thing in the name of computer, which is handy, easy to carry and of course stylish enough to flaunt in public.

But, moon isn’t as shiny as it appears from distance. I invested in a table expecting it to erase all my worries and add comfort in my life, but I was rather introduced with new kind of troubles.
My everyday life like with a tablet:

Enough! I had certainly had enough of infidelity from this arrogant tab and I decided to give it away. So, I gave it away to my cousin brother, who still owes me good gesture for that, ARROGANT COUSIN BROTHERS HUH!

Who says life doesn’t end with a Tablet. It does man! My mother declared me careless, arrogant and a girl whose brain is filled with complaints. She warned me that if is sell or give away this tablet to someone, she would never let me buy any gadget ever again. I knew she wasn’t serious. But she actually was!

While reading through the contest and features PDF of LENOVO YOGA TAB, the only thing that came in my mind was whoah! That’s the gadget I want to have with me for a lifetime. It’s all what I desired- A tablet, which is easy to hold, easy to stand and quick to tilt and adjust my view. But! Mom was still firm to her decision. She was sure that she would never let me buy a new tablet or any gadget because I didn’t value the previous one. So it was time for me to convince her.

So I decided to write a letter to my mom and convince her that the gadget I am talking about now is worth using. And there's no harm in winning it ;) (wink wink)

**Letter To Mommy the Great**

Do you remember a calculator+alarm clock that brother brought for me. The one which was automatic and was easy to hold and tilt through its cylindrical sides? I am sure you remember how much I liked it because it was so comfortable to use, smart and elegant in looks and of course had awesome features! Did I ever complaint for that? No… Same is the case with Lenovo Yoga Tablet.

I am sure not because of reading the manual, but also because of the fact that it reminds me of only gadget I loved, that alarm clock!

Earlier I thought that technology has really grown up. How smartly the engineers shrunk a computer into a mini pad equivalent to a book cover size. But, I got to know the actual picture once I explored that old tablet.  I realized that there’s a lot more still needed to be invented in terms of comfort, ease of access and flexibility for the users.

Every time I used that old tablet, I thought to myself ‘I wish they put an engineer in trouble! And magic will happen! Because a trouble engineer would find a marvelous way to get rid of the problem permanently. And that’s what Lenovo Yoga Tablet has done. Mommy! It is a multi-mode tablet and has:

In short, the engineers have paid enough attention to not only software part, but hard ware part as well, which is often ignored by other tablet makers. Trust me Mommy, this is a revolution.

Earlier it was
‘Take a tablet and get rid of the pain!’
And then it turned to
‘Oh God! This tablet is Pain!’

This is the journey from tablet to tablet. I am sure you understand that from which tablet to which I am talking about because few years back, we only knew one tablet, which we could digest easily. But, digesting these costly and feature loaded tablets of tech savvy world is quite challenging.
But, I really love this multi-mode tablet, because it’s what exactly I needed. Its #betterway Why? Ok read the pointers quickly Mommy!
PS: If I get this tablet, I promise I will do Yoga every day! This tablet is for those, who do and you know I’ve got a lot to DO in my life.

And Mommy! SHOPPING, INTERNET SURFING, SOCIAL NETWORKING, READING AND ENTERTAINMENT everything matters if it is accessed comfortably. And, that's what this Yoga tablet is offering-Comfort and flexibility in usage of this gadget.

Now I am sure my Mom won’t bother me winning this tablet as a gift under this content. LOL!

This post is written for Lenovo Tablet A #BETTERWAY IS HERE contest in association with Indiblogger. 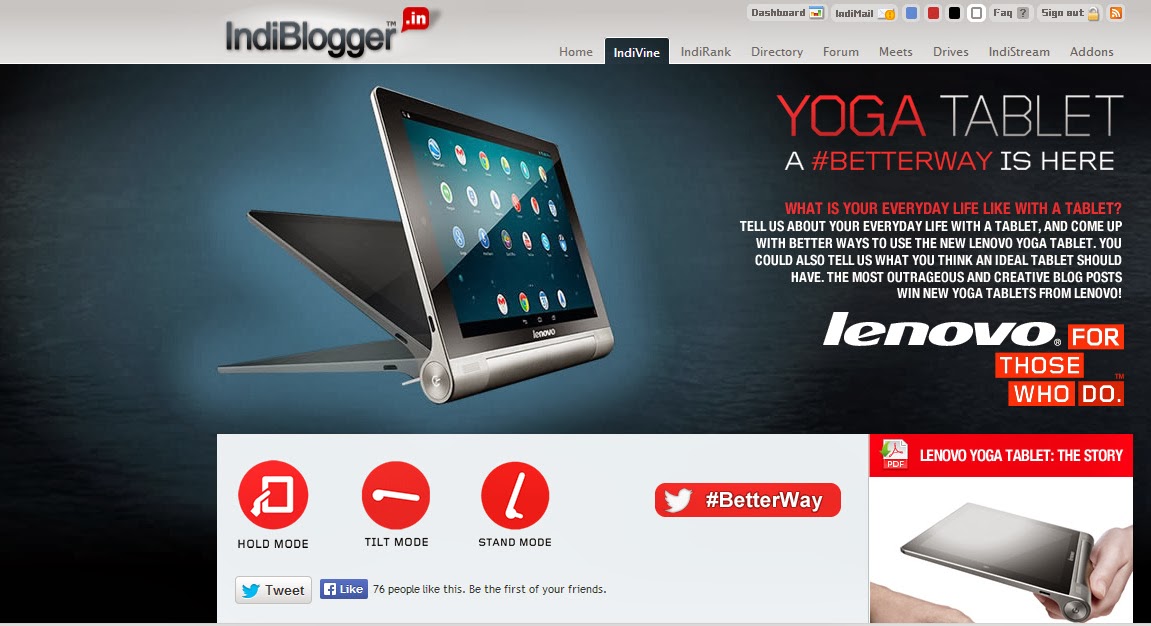