What's the difference between 'co- incidence' and 'miracle'? May be a thin line of perception. How we see things and how we believe in them. As many authors and great people have firmly said in their writings and through other artistic & communicative works that 'only what you believe in, is true.'
Today I bring such an event from my life which happened few hours ago and it made me think that how should I take that particular episode just a random 'co- incidence' and 'miracle'? Though I am a person,  who likes to believe in miracles. But for this situation, I am too overwhelmed to decide on something!

One of my respected and finest gurus (teachers) yesterday handed over two books to me about photography. Since he understands my interest in photography and always wants me to learn more, he suggested me to go through the books precisely. I would like to take a moment and thank my life and its creator to bless me with such wonderful teachers.

I flipped through the book several time and the photograph that captured my maximum attention was a young girl running naked on the street...terrified,  followed by few armymen and other kids in the background. 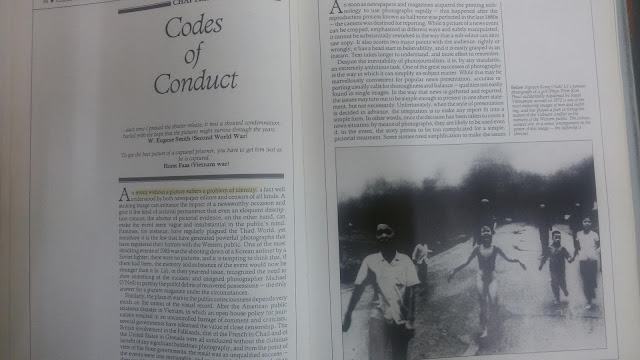 The picture belonged to Vietnam war...I stared at it, found myself almost lost in the ashes of war history. When I was tired of flipping through the book I placed it aside with the firm idea to open it up next day. This all happened on 22 June 2015.

And on 23 June 2015, I discovered a news piece about a lady named Kim Phuc in 'Rewind-Where they are now' series by CNN. You can read the entire story here.

The news piece talks about a 52 year old lady Kim Phuc, who happens to be the naked girl in this picture. This picture is 43 years old and  get to discover it in a book given by teacher on the same day this story is published by CNN. I can't just name it plain co-incidence and walk away. Neither am I trying to name it a Miracle. I am rather concerned about knowing and exploring that why I encountered about this in such a way that I get maximum notice of this particular story. What's life planning for me?

Anyways, back to the picture and Kim Phuc. She survived the thrashes of was but scars are still imprinted on her body and soul. She says that those events of war still haunt her mind but her heart is healed and she has learned to forgive. She says, "I realized that if I couldn't escape that picture, I wanted to go back to work with that picture for peace. And that is my choice."

What a beautiful massage a war victim has given here. The idea is to call for peace and end the war. Kim now runs a foundation for victims of war and underprivileged children by the name Kim Foundation. She is also 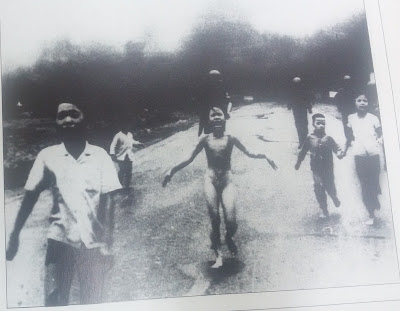 The photograph was taken by Nick Ut, who was a seasonal war photographer and the photograph managed to appear on the headlines of many newspapers in 1972.

I don't know what is the purpose of me exploring all this. But, I am sure about one thing that this incidence has increased my curiosity about reading the book that Rajinder Sir gave me and of course more about Vietnam war. Cheers :)
Posted by P!yu at 10:52 AM