The fiery situation: well, they call it hunger!

Okay, before I begin to jot down my thoughts for the contest, “KFC chicken grill- sets you on fire!” let me confess that I have been thinking for more than 10 days that how to write such a stuff, which can help me in winning the croma store voucher worth INR 30,000, the prize for winner promised by Indiblogger and yeah those KFC food vouchers too.
Tried hard to structure a fiery situation that can get me the pleasure of being a winner, wanted to add the entire hot topics which allure modern readers, gave my best to look for the hi-fi quotes, non-veg jokes & stuff but at the end couldn’t get my hands on it, the blogger inside me kept banging at the window of my mind that I had closed years ago, the window that invited the thoughts having the essence of kindness in them. My desire of buying a DSLR (Digital Single Lens Reflex) camera by winning the croma voucher and the urge of hitting at the ignored truth crashed inside me and created a inner-war-like situation that made its hard to pick a perfect topic, but ultimately here I am, to express my views on the assigned topic, “describe the fiery situation-real or imaginary”.
So respected Judges and valued readers,I am here with the description of the same which is real, not imaginary as for the first time, my imaginations bowed down in front of this reality- the burning issue, not because they were weak, rather they supported the fact that this issue is something worth bowing down for.
Fire is passion, fire is God, fire is pure and above all the finest element of this universe, without which the construction and destruction of this globe cannot be imagined, but far from these sacred definitions, there rests one more meaning of the term fire, “fire in stomach”, yea! The fire of hunger! The fire that burns the appetite of poor; every day, every night, mercilessly!

There are millions of people who face the fiery situation in their appetites every day. Even after burning down their entire body in the scorching heat, they manage to feed their hunger of one time. The government frequently launches the plans to deal with this blistering fiery situation, but unfortunately most of the plans lay in papers only. And the high class people hate poor as if they are not humans; the middle class people don’t have enough time to stop and give it a minute to think and help them, a few show the gesture of ‘kindness’ and throw some coins on them, but the fire is so stubborn, it keeps examining the potential of the intestine by melting its power to fight with starvation.
But is that true? Do we really not have time? Are the excuses that we offer, acceptable? Can showing up mercy for a moment and then heading ahead on your path heal the situation?
No! It cannot. We need to take the steps which can cure this disease, lying in the appetite of every poor. If an empty mind is the home for the evil then an empty stomach is the home for death. Can’t we just open our eyes wide and see, the people dying with hunger and rotten food grains resting on the path in the rain, waiting for the blockheads shouting in the parliament to decide that who shall eat them? 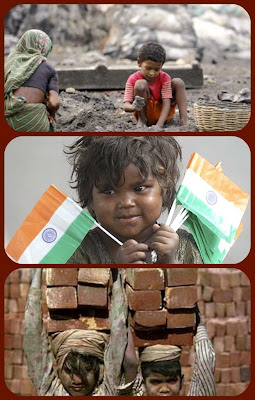 The day you dine out with your friends and family, spare a note of INR 1000 to inflate your fake glory, then have you ever given a thought that the food which you leave half eaten, is the hope for a shrunk abdomen, who has been waiting for you to throw it so that h/she can dig the dustbin with the street dogs to find it and feed the fiery situation.
Ever pained your brain-nerves to think of skipping a party one day and contributing money to provide food to the ones who really need it, instead of inhaling the smoke of cigarettes at your favorite sutta corner or eating up at the shop which you must be visiting 100th time? If you haven’t, well, then give it a try, may be it helps you to set yourself free from invisible fire that keeps burning your head all time in the form of tensions & worries.
I am not asking to do this all for the barefaced beggars, who tap at your car window at the traffic lights or snatch the corner of your shirt and make poor faces to show you that they have been wandering without food throughout the day but actually when you donate them something, they go and smoke it away in a cigarette.  All you need to do is look for the person who really has been suffering through the ailment called hunger, I know, that being the modern generation, you are smart enough, when you can judge by watching the promo that how the film is gonna look like, then it is pretty simple to find out the tummies bearing the real fiery situation.
Help the poor in fighting with the daily fiery situation inside their appetite. Contribute! It really feels good.
For you the picture below may the reason of twisting your tongue for praising it with the best possible adjectives such as delicious, scrumptious, mouth-watering, yummy and blah blah blah, but for a poor, it is the most beautiful dream ever. 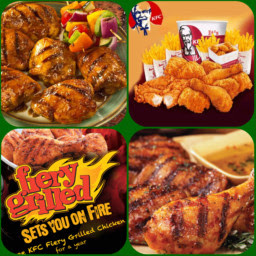 If this blogpost has knocked at the door of your heart, then my purpose of participating in this contest is accomplished, now I hardly care for the rewards and prices, Dear DSLR, seems that you need to wait for a little more until I get my hands on the salary package which allows me to get my hands on you.
PS: those who win these KFC vouchers try and donate a few of them to the ones, who need it more than you, to feed their hunger, not the desires of their tongues.
Thanks
This post has been written for KFC Grill Chicken, the  Indiblogger contest, launched by KFC in association with Croma Retail Store. For more info, click here.. :)