A driver bumps the DTC bus into the wall, crashing five people; a sixteen year old boy loses his life and others get the injury which they are going to remember for a long period of time. The matter of DTC accidents in the capital has become so common that newspapers and TV news channels are bored of it and pick it up if only they don’t have any other spicy stuff to cook upon.
Police claims that driver lost control over bus and he has been arrested for the offense of negligent driving and killing someone; quite the reverse the driver claims that the bus he was driving was an old (KHATARA I would say) bus and the breaks of that vehicle got out of control.
Who is responsible for this entire blunder? Is it the poor bus, which has been working as a slave since decades without any hope of getting retirement or the driver who has been driving it to earn his livelihood? Now what would possibly happen? May be few reporters and bloggers like me will write about this issue and then a new happening of this sort will divert our attention to the fresh bungle. The authorities will, (as usual) try to get their ass out of it and may be the poor driver will get paid years of stay in jail as the appraisal of his years of service to the people of this metropolitan. 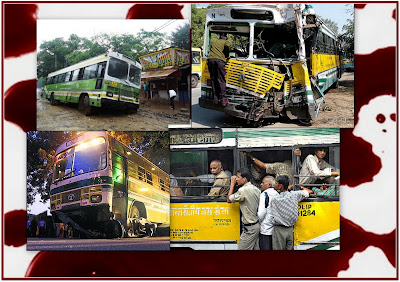 The system is shameless, people are speechless and the future of this country is futureless….Just because the blockheads handling this entire system cannot perform their duties, people die and the middle class men serving this system like that driver get trapped into uninvited offensive situations. The entire system of the country is more like an OLD DTC BUS ..KHATARA (decayed).. which has no breaks, no speed, no structure. Nothing. I agree with the thoughts of my Bro who emphasises that there is an urgent need to crash down this deseased system in order to build a new one so that the disaster could be controlled that takes place every day.
The silly mixture of old and few new try-outs is even more dangerous Because no matter how much sugar you add to the poison, it will still be a poison, bitter & destroyer.  The clear example of the same is the muddle of old DTC buses and new low floor ones, even after the investment of crores , no one has the courage to clean sweep the field of old models of DTC buses;  what are the administration people waiting for? The poor buses to go on strike for demanding a retirement!

This is nothing but ignorance…If the situation stays like this, may be one day machines too would need a special court to hear their matters…the roots of problem are so strengthened, so there is an urgent need to Dig it Deeper .
Posted by P!yu at 4:12 PM