In search of "Talaash": Movie Review 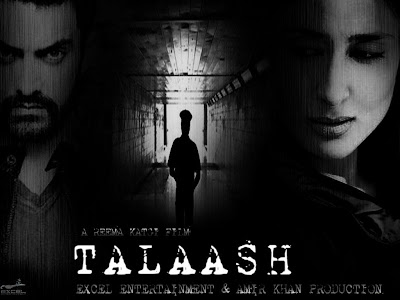 The film, which had all the eyes on to it, is finally in theaters now. The first thing I must say about the films featuring Amir Khan as lead is-“Houseful of audiences” from morning till evening. Earlier it were the magical films of Golden Era or single screen theaters, which experienced such magic, But it is only Amir’s films managing to stand out strong in the multiplex trend with the same glory.

The film begins with the intentional blur on the screen, playing Muskaane Jhoothi hain in really notable voice of Suman Sridhar, showcasing some faces, which are sad, hiding their pain or learning to live with it.

And, when the blur fades out, a night scene of a seaside road in Mumbai fades in, filming the same hopeless and tired people at the middle of the night. Suddenly, a car runs and rashes on the road, even before you can really settle yourself in your seats and relax, the terrible accident, making the car fly in air and fall in the sea alongside, shocks you with disturbance. Disturbance that lasts throughout the film and disturbance you fall in love with eventually.

Amir Khan is introduced right after the accident happens, as inspector Shekhawat, serious, poised and dedicated. The dead person in accident happens to be a film star, making this case high profile and complicated. As the accident happens near a famous red light area of the city, it takes inspector Shekhawat (Amir Khan) to the notorious roads, where pimps and prostitutes rule or are being ruled in their own ways. Here he meets Rosy (Kareen Kapoor), who claims to be an A+ category whore and famous for satisfying here customers with love and passion. She offers help to Amir for whatever he is searching for, fetching Amir’s attention towards her ‘till the end’.

These streets too unfold people who are blackmailers and criminals at small or big level. Nawajjudin Siqqiui gets a remarkable presence here. A lame helper boy, working under a guy named Shashi, who happens to be involved in murder case of the film celeb.

Apart from this High Profile celeb car accident mystery, a dull and sad personal life of inspector Shekhawat (Amir Khan) moves as the sideline factor featuring Rani Mukerjee as his on-screen wife Roshani. Roshani is a lady, who is fighting through psychological issues after the death of her only 8-year old Son-Karan. This troubles Amir but more that troubles him is the complicated case strangled in regret of his past as he believes his son died because of his irresponsible attitude.

Throughout this process, he seeks for the truth, searches for it everywhere and chases it hastily. Meanwhile Roshani (Rani Mukerjee) is busy in talking to her son through a lady, who can talk to spirits. This disgusts Amir and makes him feel bad about her wife’s mental condition. To get rid of all this, he prefers meeting Rosy, where he feels a different sort of peace.

Floating between action, frozen time, investigation and memories of past, the story ends up unfolding an unbelievable yet acceptable ending to every character’s “Talaash”. But, what freezes Amir is the fact and truth that since the case happened to his life, he was talking with a Ghost. Simran’s Ghost. The thing he never believed in, happens to him in his this very life, leaving him clueless, speechless and restless. But ultimately, he manages to find all the answers and prefers to find a new way towards life.

The film unfolds so beautifully that audiences are to get a hint of what to happen next exactly the moment before it appears to screen. That gives a wooah feel to everyone projecting the next scene in his/her mind and getting exactly the same on screen in very next moment. This is what you call hook a guess. It keeps you laced throughout and without letting you feel like blinking your eyelashes a bit.

I must say Reema Kagti (Director-Talaash), along with Amir Khan (lead protagonist) have worked with such a brilliant passion. Every minute detailing tells this, each suspense, every next scene and shot are coded beautifully like a coded programming by software engineer. You cannot have the whole program running if you miss a single code and this is what can be seen clearly here. The coding is so seamless that you don’t lose interest for a single second; neither you get to know very soon what the story is going to be all about.

All the songs are played in background and you kind of love them being played through the big sound systems of big screen. But, without of background score of Movie, I must say, there hasn’t been such an impact. Perfect background score, expressing it all…!!

Amir Khan does justice with his role and performs with enough passion required to bring an Inspector Shekhawat to life.

Karina Kapoor looks too pretty in her roadside seductress’s role and keeps the viewers hooked with her mysterious yet stylish dialogue delivery.

Rani Mukerjee has performed convincing enough. Seeing her away from screen for years had made most of her fans think twice before considering to watch her films. After all, how much time it takes for a forgotten heroin to forget acting. Anyways, but this doesn’t go with Rani. She did perfect in the role assigned to her.

Ahaan! Special mention for the wonderful dialogues by Farhaan Akhtar and Additional dialogues by Anurag Kashayp. They made the story too way beyond it could have reached normally.

And, when it comes to special mentions, the stimulating lighting bangs a remarkable attention. How perfectly the lighting has been designed that every scene comes alive carrying the essence of every emotion, which the director wants to portray, character wants to reflect and audience wants to perceive. This sensation created by magical lighting keeps you entangled to it as light entangled the bumble bee... :)

Recommendations: I loved watching it and found myself thrilled and delighted. The climax drenched the blood in my nerves for a flash of second. Now it’s your call. I think that was convincing enough.

Looking forward for your reviews on my review.

PS: I didn't simplify the story intentionally. After all, you all too deserve to have a good show... :) Enjoy