Kasab Fallen… what next??


Being the writer, who began to blog with the clear purpose of spreading love and sharing pain through her words, is today amazed to see herself typing for the issue called terrorism.

Kasab was hanged today morning (21 November 2012), 7:30 A.M. paying tribute to the lives of 166 people, who were assassinated during the brutal attack of 26/11. This will surely tell the whole world that arrested terrorists are not treated as guests in India. Sooner or later, they are treated the way they should be. This step has given a bit of contentment to the families and relatives of dead and injured in this attack, which they have been looking since the day they faced the dark day of 26/11 in their lives.

But, the only thought, which troubles me is, what next…??

The mask, which appeared as publically accused face of the ruthless massacre on 26th day of November has fallen. Kasab is no more! But everyone knows he was just a mask. What about the real faces, who veil themselves behind such masks? Who is going to deal with them, when will they be dragged to the platform and get their necks tightened in the nooses?

Kasab was a teenager, born and brought up in not so good conditions in Pakistan. As much as I have been able to Google about him, poverty and disruption of his daily desires were the valid reasons behind he turning shoplifter or ruffian. This was the point, where transforming him into a terrorist and fueling him enough to make such a big and brutal massacre take place was someone else’s talent I would say. The talent of those who cover their horrible faces behind such pawns and keep carrying out major incidents of terrorism in our country.

It has taken us 4 years to deal with one “mask” and it is not tough for any normal human being to estimate that how many of these “new masks” must have been produced within this time period. The point is how long we will keep fooling ourselves by chasing, arresting and hanging the pawns…

Kasab, who was hanged till death in this morning, was just a ragdoll and many like him are stocked up with people, who are enemies of people’s smile and happiness. But, still it has given a reason to smile all those, who had witnessed the painful days after 26/11 was brought to their lives, headed by the Kasab-the pawn, and monitored by the real faces, handling the remote control to damage others' lives, yet not having the courage to face it all…

One pawn has fallen, thousands are being prepared and stocked up in the hidden bays of terrorist master minds. Now what next..? 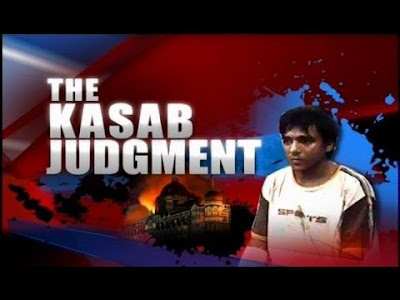