Declaimer: I premiered the Pepsi videos with Pepsi Can in my one hand and Pop Corn Tub in another. OH YEAH! You are right. I used my nose to move the laptop track-pad! So what, got problem with that? Eh!

Being a blogger is always a privilege. I found it really interesting to get a chance to share my opinion on all the ads posted under CRASH THE PEPSI IPL contest, despite of not being one amongst the expert jury panel. Here's the summary of my overall experience :)

I enjoyed watching every video! Though, I enjoyed watching some a little more than others. But, one thing was common throughout the process of clicking through different videos, which was a feel good factor. Some ads excelled in terms of concept, creativity, direction and content but others could not reach to that level. BUT, every ad maker's efforts are needed to be appreciated because of following reasons:
Now its time to talk about the #CrashThePepsiIPL phase 2:

My Favorite Ads| My Hitlist

I liked many ads, based on their ability to entertain, engage and embed Pepsi in it flawlessly. There always has been a good thing about original Pepsi advertisements-In all the ads by Pepsi India, the product has always stood out as unique element but never stood separate from the lead protagonist in the ad. Hence, Pepsi and the actor in the ad have always been connected. Therefore, finding this message of connection and togetherness was very important for me. 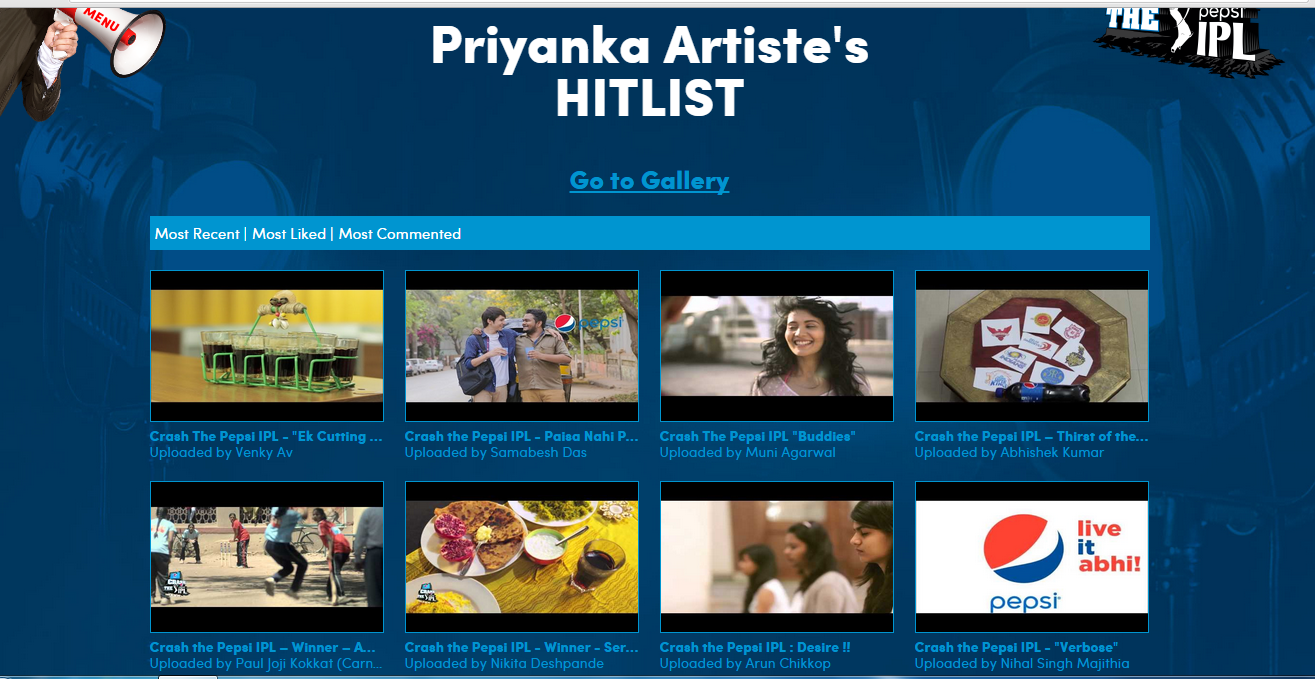 Cutting chai is considered very Indian thing and the way the admaker has introduced cutting Pepsi, clearly gives a message that how wholeheartedly India has accepted Pepsi as a prime beverage choice. People celebrate life with Pepsi and the soft drink is definitely associated with the spirit of cricket since beginning. India loves cricket and India loves drinking beverages in cutting glasses. Hence, drinking Pepsi cutting style really says a lot. :)

Positive advertisement, which blurs all lines of discrimination in just 30 Seconds

What you drink, what you eat and the way you behave reflects in your character and your personality. The spirit of sharing in this video is really heart touching. The way a soft drink can connect two people of different social standards and remove the discrimination grounds is simply brilliant.

PS: I loved the expressions of both the protagonists. The guy with Pepsi is really a good actor.

I found this ad the cutest of all :)

I have spent college days playing around with my friends and I giggled when those two boys make fool of their lady friend to ignite some moments of memorable joy. I have experienced the same with my friends. They used to pull my leg and make me feel special in a different way. Pepsi fits in smoothly in the entire picture.

This is amongst the smartest ads made under #CrashThePepsiIPL campaigns. The way all the teams of Indian Premier League have fallen together by rolling a Pepsi Bottle over that they make India's Map so beautifully, it instantly won my heart.

This is amongst the most clever plots for this contest and it is my favorite advertisement too.

Women Empowerment: The Pepsi Spirit: How could one not like it

Some parts of the country still believe that women can't play cricket and this wonderful advertisement breaks all the stereotypes in a stylish manner. Pepsi seems to be the driving force for the girls to play even better as a Pepsi Can is put forward by the boys as a challenge. Indeed thoughtful and creative concept, well executed!

All the actors in this ad have done complete justice to their roles and performed excellently.

Simple, Smart and Extremely Creative: How can one not like it!

The scrumptious and lip smacking food from all the eight states, where the IPL teams belong to. This is an amazing example of a beautiful and creative mind. Such a creative idea that it leaves you spellbound. I believe if there has to be 9 gems of IPL then 8 are the teams and 9th one is Of Course-Pepsi!

This is the most clever advertisement as per me!

Ads with surprise element in them are always exciting. They keep the user engaged till the end. I was surprised with the way the Yoga Guru reveals all the Pepsi Cans under his shawl. This is something you don't see coming in the ad and hence it makes you feel stunned and happy!

This ad surprised me!

This is a smart method of making an advertisement. When you don't have resources then it becomes very difficult to bring out even smallest of the Audio Visual program. In this ad there is combination of text and script. No use of excessive props, locations and actors is done, but still the advertisement manages to stand out. Hence, I like it!